In honor of Netflix re-launching (pun intended) Lost In Space, with Parker Posey as June Harris/Dr. Smith and House of Cards’ Molly Parker as Maureen Robinson, we’ve picked the best sci-fi TV shows you can stream on Netflix right now. While we’ve got modern classics such as Stranger Things and Black Mirror, you can also dig deep into the archives of retro sci-fi, with every Star Trek series, The Twilight Zone and the campy relics of Mystery Science Theater 3000. 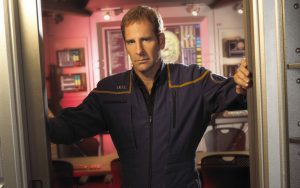 Star Trek: Enterprise struggled to find a fan base when it first aired. This is really too bad, since while Seasons 1 and 2 could be a rough ride, Seasons 3 and 4 were full of thrilling adventures and difficult ethical conundrums. In this prequel series, Capt. Jonathan Archer (Scott Bakula) leads a crew of explorers aboard the experimental starship NX-01 Enterprise. Seasons 1 and 2 follow the crew’s first-time encounters with various Star Trek mainstays, such as the Klingons, the Ferengi and even the Borg. The show peaks in Season 3, however, in a season-long mission behind enemy lines against the mysterious Xindi. — Marshall Honorof