A picture taken by businessman traveling through south-west China shows a ridged object that appears to be suspended above Lake Dian in Yunnan Province.

John Chen, a 44 year old businessman from Taiwan, was with coworkers at the lake that day, taking pictures and enjoying the scenery. Nothing seemed out of the ordinary until Mr.Chen returned home. “The strange thing is I didn’t see it at the time. It was my wife’s sister who spotted them. She said there was something in the pictures and I just thought she was joking,” Mr Chen said. His colleagues had taken plenty of pictures of the lake that day and when compared to those, the object did not appear anywhere.

British UFO expert Philip Mantle was not able to say definitively what the object was. “What I can say is that the photographer in question here has always cooperated and seems to be genuinely puzzled by the images on his photos,” he told MailOnline.

Although he doubted that the ring is extra-terrestrials visiting China, he thinks more research on the photo is needed. 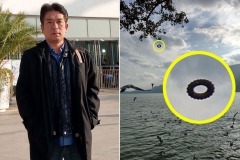 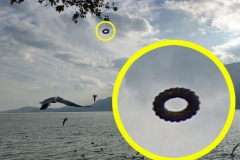 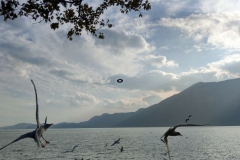