Scott C. Waring, a UFO enthusiast, says the face of America’s extraterrestrial leader is hidden on the US dollar bill.

‘Aliens have placed secret messages in our own currency. Some say you have to draw the alien, but thats not true. If you just add contrast (shadow) to the original, it will turn into the alien head.’

‘Alien art is suppose to be outside the realms of our comprehension, made not on one level like human art, but many levels of understanding, making most too complex for our primitive minds.’

‘Are there alien overlords that control Americans minds and bodies to do their bidding? Well, there are aliens on Earth and some do have powerful telepathy that can travel long distances, so I would say yes, it is possible and this classic one dollar US bill is evidence that alien has infiltrated the US government and may have permanent control.’

Is the this hidden discovery evidence of an extraterrestrial shadow government that has infiltrated the United States? Leave us your comments. 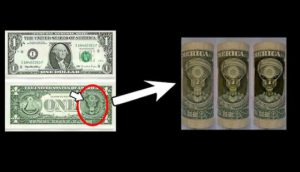 Travel Deals to Europe! Save up to $30 with Promo Code EUROPE30. Book Now!

Fly and Stay Cheap!Get up to $10◊ off with Promo Code FLY. Book Now!

Experience all the beauty of Canada with this special promo! Get up to $30◊ off with promo code CAN30 Book Now!

Special Travel Deal forMilitary Personnel! Get up to $11 off with promo code FORCE11 Book Now!

Save on Your Trip to Athens, Greece!Get up to $40 off when you book with promo code ATHENS40 Book Now!

Viva Las Vegas!Here’s your ticket to Sin City! Get up to $30 off with promo code VEGAS30 Book Now!

Make some memories in magical Miami!Get up to $30 off withpromo code MIAMI30. Book Now!

Ride in Style Get up to $8 offcar rentals with promo code CAR Book Now!

Great Deals on Global Flights!Get up to $20 off with promo code INT20.Book Now!